Founded in 1924 by Adi Dassler following his return from the first World War, Adi made sports shoes in his mother’s laundry room in his spare time and quickly recruited his brother Rudolf to the business. Originally named The Dassler Brothers Shoe Factory, the pair worked to develop spiked running shoes for athletic events and was the first business to develop pairs with canvas and rubber spikes instead of metal. In 1997 adidas bought Salomon and it’s corporate name is actually now known as adidas salomon ag.

We’ve been looking for the best student picks at Adidas which we’ve listed below, but remember if you’re looking for discounts check out our adidas student discount for the latest. 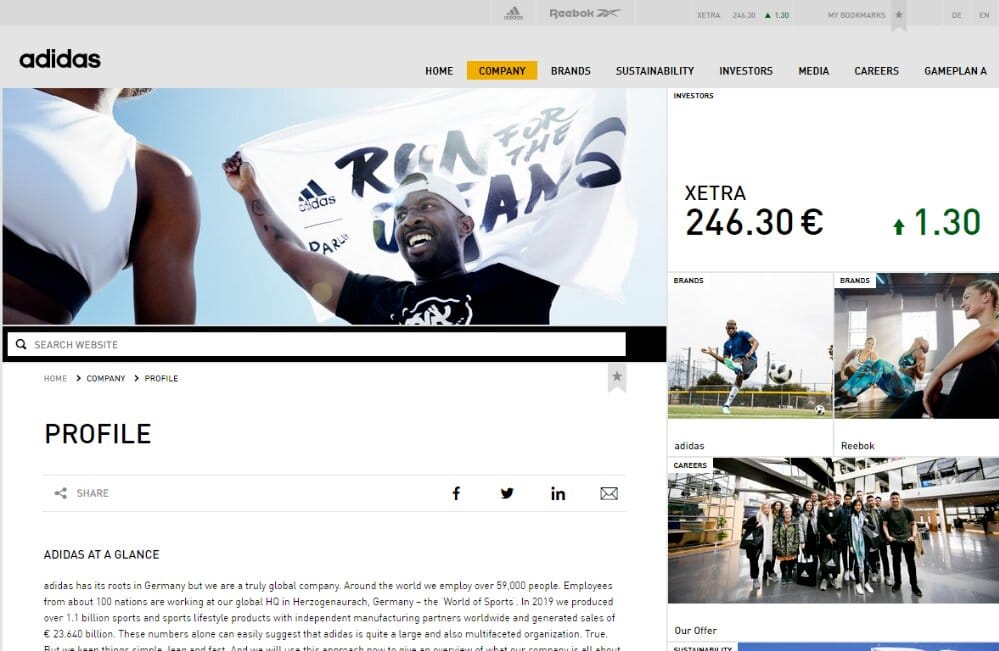 HISTORY OF THE COMPANY

The Dassler Brothers worked to develop spiked running shoes for athletic events and was the first business to develop pairs with canvas and rubber spikes instead of metal. In 1936, the brothers persuaded US sprinter Jesse Owens to wear a pair of their hand-made spiked shoes at the Olympic games that summer; and he won four gold medals! The business’ reputation was elevated and by 1939, the brothers were selling 200,000 pairs of shoes every year.

In 1947, the relationship between the brothers broke down completely and they split their business efforts; with Rudolph forming the brand that’s now Puma, and Adi Dassler Adidas.

The brands were fiercely competitive over the next few years and several athletes swayed back and forth between their endorsements and sponsorship deals. Their most recent slogan has been ‘Impossible is nothing’. A famous CEO of the past was Robert Louis Dreyfus.

The three-stripe logo that’s made Adidas into a household brand today wasn’t actually acquired by the company until 1952, when it purchased it from Finnish footwear brand Karhu Sports… and paid 1600 Euros and two bottles of whiskey for it! What a deal. Student Discount Squirrel approves.

Adidas’ main competitor now is Nike, but it remains to grow from strength to strength and is an extremely well-respected brand throughout the world for both sports and leisurewear.

Multinational sports giant Adidas, founded by Adi Dassler, is the largest sportswear manufacturer in Europe and the second-largest in the world including the United States.

Headquartered in Herzogenaurach, Germany, the brand manufacture, market and sell a vast range of sports clothing, footwear and equipment. The Adidas Group owns a good chunk of household sportswear and activewear brands, including Reebok, Taylormade and Runtastic.

The main focus of Adidas was, for many years, football shoes, clothing and equipment, and the company still own part of the Bayern Munich Football Club in Germany.

The company remains a major supplier of football kits, sporting goods and shirts for various league and international clubs, as well as referee kits through many countries and territories. Adidas has been at the forefront of producing football boots for a variety of surface types and competitions and in 1979 released the innovative Copa Mundial moulded boots for matches held on firm dry pitches – which went on to become the best-selling football boot of all time! FIFA have commissioned specially designed footballs for its World Cup tournaments, and Adidas is now an official sponsor of the UEFA Champions League.

As well as clothing and sporting equipment, adidas are well-known for their accessories with the adidas logo. These include the currently very popular slider sandals, known as Adilette, which were first designed by the brand over 50 years ago! There’s even a massage-version of the sandals called Santiossage, with small plastic nubs built into the sole for a foot massage as the wearer walks. Other such accessories produced by Adidas include the miCoach fitness app and tracker, a range of shower gels and body lotions, watches, eyewear, sunglasses, bags and socks.

Adidas equipment and running shoe is in competition with essentially every other major sporting manufacturer but selling through its own website and retail outlets as well as through other distributors gives it wide appeal. The brand also invests heavily in sponsorship deals in sports teams, individual athletes and competitions; spanning football, rugby union, tennis, basketball, hockey, ice hockey and cricket, all across the world.

You probably own an Adidas apparel and footwear item and even if you’re not a sports or fitness fan, you probably should, as the brand is synonymous with quality and style.

Originally designed for athletes in locker rooms to help maintain some comfort and hygiene, they’ve now become a fashion must-have for the beach, swimming, nights out and just doing your normal errands!

Adidas sells a range of sliders for women, men and kids, and for all uses, in all colours and styles. Take advantage of this comfort while they’re still considered socially acceptable!

Whether you play a sport or just train at a gym, this bag is only the medium option but is easily big enough to fit in everything you need!

There are an adjustable shoulder strap and padded handles to give you different comfy carry options, and there’s detachable inside dividers to separate out and organise your essentials, as well as optional detachable boot bag for your dirty shoes.

Despite being made from polyester, all materials used in the production of this bag are entirely recycled and are part of the Adidas Sustainable Product Program.

The classic striped socks you’ll see gracing the ankles of everyone all summer, this multi-pack presents great value.

The foot-bed is half cushioned for comfort and the blend of cotton, polyester, nylon and elastane gives for a great stretch but breathable wear – so no stinky, sweaty feet after a lot of walking, cycling or running!

These socks are ribbed and feature the Adidas trefoil logo as well as the classic three stripes; so there’ll be no doubt about who it is you’re wearing.

If you’re looking for similar offers then check out these pages below:

If you’re looking for similar offers, you may like to visit the pages below: