It’s said that rather than upgrade your seat, you should upgrade your airline – and Emirates is the perfect airline for the job! And make sure you check out our Emirates student discount guide for some great money-saving tips and Emirates cheap flights.

Where it is one way or return one way, for 1 adult or a family, we can help you get some value flights. Even on first class or business class too.

Did you know you can book a flight hotel package. Sometimes, this can save you and there are some great deals to be had. Also if you don’t have a fixed destination, a multi city option could be great value.

The biggest airline in the Middle East and the world’s fourth-largest overall, Emirates operates 3,600 flights a week and has more Boeing 777 planes than any other airline; boasting 130 of them in their fleet. 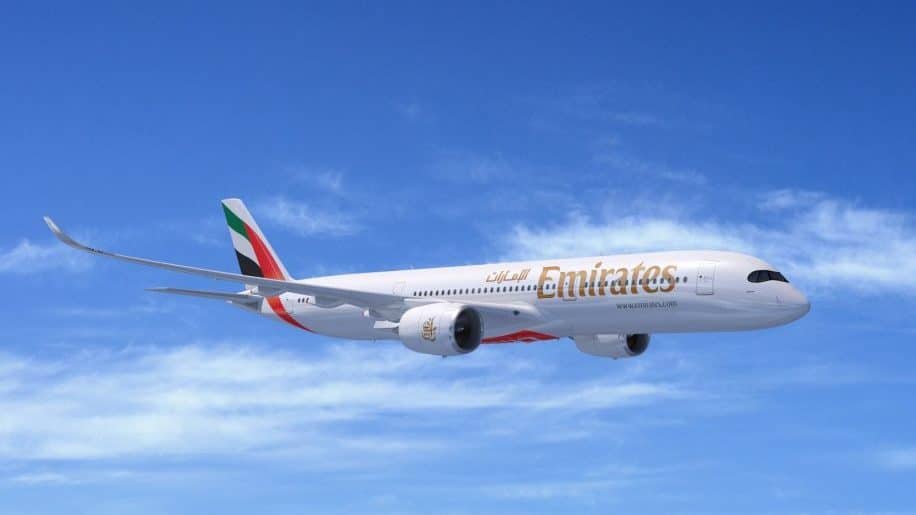 Emirates flights travel to 141 cities in 81 countries across six continents, so wherever it is you want to globe-trot to, you’re bound to find it on an Emirates route!

Emirates’ brilliant service is a result of the business’ diversification into so many of its own suppliers, allowing them complete control over the experience their customers receive. This includes owning and offering their own airport customer services, engineering, catering and tour operator operations.

All subsidiaries offer employees profit-share to motivate staff, and the company hires over 40,000 staff who as a result are entirely bought into the company’s ethos and objectives.

Emirates Flights from the UK

In the UK, Emirates flies from Birmingham, Glasgow, London Gatwick, London Heathrow, London Stansted and London Manchester. Many of these airports have specific airport lounges dedicated to Emirates customers, where you can grab a drink and snack before you board.

Even in Economy Class, you’ll find exceptional service that’s unrivalled by any other company. Wi-Fi is free, so you can post away across social media as you travel and keep in touch with those you’re leaving behind and meeting while you’re away.

There are over 3,000 channels of entertainment for you to watch and listen to (you won’t go bored, no matter how long your flight is) and meals served are inspired by the local cuisine of your destination.

You’ll have a head-start on the culture before you even arrive. Amenity kits are supplied for free to all customers and include a toothbrush and toothpaste, eyeshade, socks and earplugs, all in a reusable bag. This gives you the chance to freshen up nicely before you step off the plane, arriving fresh and looking great even if you’re feeling a little jetlagged.

What’s more, if you’re flying with children, or just don’t like them being sat around you, there’s no need to worry about travelling with Emirates. Kids are all well looked after by cabin crew and will be entertained for the whole journey – no seat-kicking or continual screaming on these flights!

HISTORY OF THE AIRLINE

Gulf Air cut back on its services to Dubai in the 1980s amid fears that it was acting as a ‘feeder’ airline for others who then flew their customers out of the region.

The Dubai Royal Family founded the airline as a result, providing two aircraft to help ensure that their city wouldn’t be cut off from international travellers. The first flight was in October 1985 and flew from Dubai to Karachi. Within a year, routes were added to Jordan, Bangladesh, Egypt and Sri Lanka and more aeroplanes were purchased. During the first year, the airline had record-breaking growth of 30% year-on-year.

By the 90s, Emirates were making a profit of $500million per annum and partnered with other airlines to provide around-the-world services. In 2004, the airline started flying to North America and became the principal sponsor of London’s Arsenal football club – and their stadium names the Emirates Stadium.

In 2017, Emirates renewed its ‘aircraft buying spree’ and continued to eye expansion around the globe. Now headquartered in the purpose-built terminal three of Dubai International Airport, the airline has built up a reputation for flawless quality service and exotic, luxurious destinations.

The home of the Emirates Airline, Dubai has a unique culture and landscape that’s hugely different to anywhere else in the world. The largest and most populous city in the United Arab Emirates, this isn’t just the destination for a city break, but also ideal for a beach and lounge-around-the-pool type holiday. It’s not the cheapest place in the world for a vacation but is full of opportunity and when you shop sensibly, you’ll find it comparable to London for costs.

Thailand is the must-go travel hotspot for students, be it in a gap year or between term times. Bangkok is the capital and makes for a great base for you to travel on further if you wish, or to experience the diverse and rich Thai culture from the city. Flying to Thailand isn’t the cheapest travel in the world but once you get there you’ll find prices considerably cheaper than those you’re used to; including beers for about £1, bus tickets for about 80p and cinema entry for £4. It’s a bargain once you’re there, so you can seriously indulge and soak up the new culture!

Somehow South Africa doesn’t seem to make it to mainstream student travelling destination lists, but those who have had the wanderlust to visit will always recommend it. The largest city in the country, it isn’t actually one of South Africa’s three capital cities (that crown goes to Cape Town, Pretoria and Bloemfontein!) but is a metropolitan haven for shoppers, travellers and those looking for new experiences. Four a half million people live in Johannesburg, speaking 10 languages and coming from a broad spectrum of backgrounds and cultures – so you’ll never be at a loose end for things to see and do and people to meet.

If you’re looking for an Emirates student discount, then have a look at our comprehensive guide where we guarantee a 10% code plus more money-saving tips.

If you’re looking for similar offers, you may like to visit the pages below and articles including Easyjet Last Minute holidays, National Express Buses, Travelodge Promo Codes: