We can confirm that there is a Vans student discount code with the standard reduction at 10% off all trainers. It’s easy to get, just head to this special page verify your student status and you’ll be issued with a Vans Unidays discount code to get the reduction.

There is also currently a January sale now on, with discounts of up to 50% off. It’s one of the best times of year for students to save.

There are also limited periods throughout the year where the discount rises to 20% so look out for these, plus make sure you sign up to the Vans family loyalty scheme, where you can currently get free express delivery.

Did you know that there are more ways for students to get bigger discounts at Vans? Here are 3 of the best:

But the savings don’t stop there. Students can potentially save more money by looking at our Squirrel savings section below: 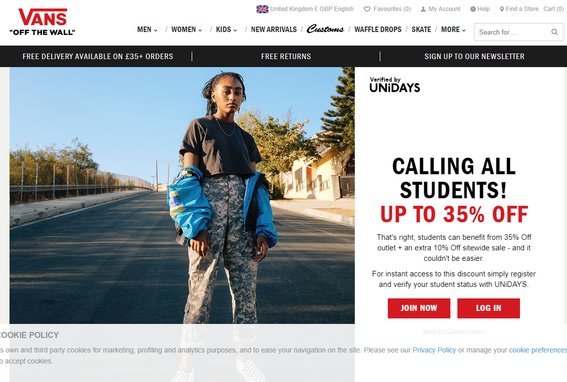 We love the stunning array of Vans trainers and shoes there are nowadays. From the perennial favourite Old Skool range through to a huge choice of colours, materials and styles and exclusive collaborations such as Peanuts, there really is a Vans shoe for everyone!

Get the Vans Student Discount

Currently there is Vans student discount code of 10% off all full-priced items. Sometimes this increases for limited periods throughout the year so look out for this.

Here is how you get it:

But did you know there are ways to get even bigger Vans discounts than the standard reduction above? No? That’s what the Student Squirrel is here for and why we are one of the fastest growing student discounts site in the UK.

There is lots more advice on how to save though at Vans, so keep on reading!

“Even though there is a 10% Vans student discount, it is possible for students to save move when buying this fashionable trainers. Read on for more tips”

The student discount market is big business these days and Vans is no exception. However it can be tricky finding out exactly how to get your student discounts and what the best ones are. What with NUS, Unidays and Student Beans; these are the 3 big student discount schemes in the UK – where do you start?

So while you’ve been down the gym, or the pub the Squirrel has been doing the hard graft and researching. And here are the results!

Get the Vans Unidays Code

So the great news is that Vans is signed up to the Unidays student discount scheme so there is a valid Unidays Vans Discount.

To get your Unidays Vans 10% code, head to this page on Vans.co.uk, follow the instructions and you’ll be getting a fresh unique Vans Unidays promo code. Awesome we say.

Now don’t forget to check out our savings section to see the latest ways that you can save with any available Vans promo codes which could enhance your savings even more.

Does Vans have a NUS Totum Discount?

There is no NUS Vans scheme in 2020. HOWEVER, NUS students are entitled to the 20% through UNiDAYS Vans discounts as described above. Kerching!

Are there Vans Student Beans Codes?

Unfortunately there is no association between Student Beans and Vans. Usually you would be able to get a unique student discount code to use at the online check-out but there is none. Make sure though that you do check out the offers page though as all the deals should be located there.

One of the best and easiest ways for uni goers to save is when there is a Vans promo code available.

When they usually release these (and any Vans voucher codes) they need to be used at vans.co.uk and they last from between 1-2 weeks.

We always list live codes in our savings section so make sure you take a look. They include:

The Student Discount Squirrel has a tip:

“Using the Vans voucher codes are super simple, just do your shop, get to the check-out and enter the code and the relevant reduction or offer will automatically be applied.”

One of the best ways for students to get the biggest discount is when there is a big Vans sale on.

These sales happen throughout the year but there are certain times that they come up which we will show you below.

Interestingly enough we’ve found out that there is a permanent sales page on Vans.co.uk which is worth a look at any time of year.

However, the best savings is when there is an official sale on. Take a look to see if there is one due.

There tends to be a huge Vans Black Friday sale. They have reductions of up to 70%.

We like looking at Vans.co.uk as it’s easy to search by size which is handy and there were good reductions on dresses, shirts, trousers, shoes and much more.

If it’s coming up to that date (last week in November) then it’s worth hanging on to.

We’ve all seen the queues at 5am on Boxing Day morning outside a Vans for their big Christmas sales.

There are some amazing reductions and deals to be had but they usually go quick.

Online is a great place to go but we recommend snapping it up if you see something you like as they tend to sell out fast.

Around mid March Vans have a mid-season sale and also something for Easter too.

We’ve found that they have a good 50% sale on selected items, and then add additional discounts of 20% on sale items so you can get up to 70% off. This is one of THE best times for students to bag a bargain.

When you hear the word ‘Vans’, providing you’re not conjuring up mental images of transportation, you probably immediately think of a classic, low rise skate shoe with a distinctive stripe down the side. It’s these shoes that started the brand off and today can be found on the feet of almost anyone who enjoys a comfy flat trainer.

Vans isn’t the cheapest of brands but doesn’t sit within a premium range either (unless you’re a skateboarding professional looking to invest heavily in the proper equipment), so it’s a nice high street name you can rely on for quality and value. The Vans range now spans shoes of almost all sneaker types, as well as flip flops, sliders and some other sports specialist footwear, clothing and accessories; and tiny shoes for tiny people (or, you know, kids). All of the footwear is pretty easily identifiable as Vans due to the consistent branding throughout their collections, so if you spot a pair you like when out and about, you can be sure to find them through the brand.

Vans sell their ranges through their e-commerce website, bricks-and-mortar high street stores in major cities and shopping malls (currently 20 in the UK and a further 10 Outlet stores), and through a selection of third party footwear retailers such as Schuh, Sports Direct and Footlocker.

The thing about Vans is, although they’re not a budget brand, their shoes last for ages and the nature of their background as skate shoes means that they’re designed for scuffs, bumps and hard wear right from the off. That makes them firmly Student Discount Squirrel approved. There is a 10% student discount as standard on Vans products purchased through their primary website, but we don’t find often that this is the cheapest way to buy – we can do better! Check back here for the latest promo codes, voucher info and flash sale details, as well as the latest scoop on individual retailer’s discounts. Don’t assume shopping direct with Vans will be cheaper; we may be able to bag you a better bargain elsewhere!

History of the Brand
Back in 1944, Paul Van Doren dropped out of school and was pressured by his mother to get a job in place of his education. Starting out sweeping floors at Randy’s, a shoe manufacturer, Paul worked his way up through the business in a variety of odd jobs and at age 34, became Vice President of the whole company. He decided not long after that he’d like to own his own shoe brand, and alongside his brother, opened the Van Doren Rubber Company in Anaheim, California, producing rubber-soled shoes.

The shoes grew in popularity and the Vans logo we know and love today was actually initially produced by the son of one of the brothers, aged just 13. A graffiti-spray design that he used to decorated his own skateboard decks, it was first used on a custom pair of Vans shoes for him across the heel, and later integrated across the range to brand them. Still in place today, it demonstrates brilliantly a quirky part of the company’s history and its family orientation.

Vans was sold by the brothers in 1988 and has since been acquired by new owners again. Taking corporate know-how and aligning it with skateboard-related events and sports, the brand has grown to sponsor the Vans Warped Tour, the US Open of Surfing and hip-hop collective Odd Future, as well as a variety of skate parks and sport-specific competitions, festivals, and events.

There we have it. We’ve shown you that it is possible to get a 15% Vans student discount.

This is possible with a Unidays Vans code. It is also possible to potentially save more through promo and voucher codes, signing up to the newsletter, checking the sales page, purchasing during big sales like Black Friday and also by checking the home page for the latest promotions and deals.

We hope we have saved you some money in buying your new trainers.

Not found what you are looking for at Vans? Check these out:

Schuh sells Vans and has a 10% standard student discount. Plus you may find some trainers cheaper as they’ll be in the sale.

There is a JD student discount of 10% recently introduced and they also sell a range of these stylish trainers.

USC have a good selection and reduction for students.

Footasylum is another with 10% promo code for students.